There has been a long time bugs where you may disconnect randomly from the game even if your friends, or even from the same household stay connected in the game.

And you just get disconnected even if you don’t experience any lag. But.. Someone insisted I ddosed his friend off the game, better tactic would be just block the IP address with a firewall if you don’t want people in your games but I did neither. The person got disconnected due to bug(s) in the game.

Besides.. Ddos would kick him off Steam as well depending how big of a lag you would cause on the victims Internet connection and it’s very visible if you are getting ddosed by disconnecting Internet programs (Steam anyone?) and inability to use Internet, voice/text communication with friends. 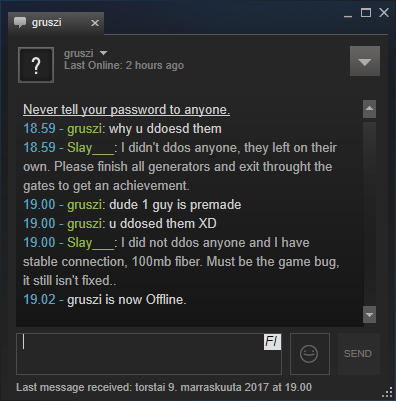 And ddos is illegal, requires high upload speed or even multiple connections to use efficiently.